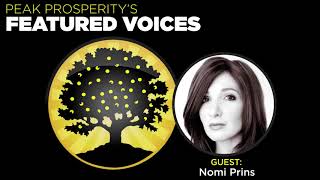 Click the play button to listen to Chris' interview with Nomi Prins (41m:38s). Nomi Prins, Wall Street veteran turned financial industry reformist returns to the podcast this week to explain the findings within her new book Collusion: How Central Bankers Rigged The World. Nomi has put together a timeline of exactly when and how the central banks have plundered the wealth of the masses since 2008, either directly or indirectly through the loss of purchasing power of the curren

You Should Still Be Planning For National Bankruptcy

The federal government just racked up its largest ever quarterly deficit at $488 billion, and nobody is talking about it. Of course they aren’t. The federal government has been running deficits nearly every quarter for the past fifty years and there have been plenty of new records in the past decade. Federal deficits are boring. Especially when compared to the drama being played out between Trump and his deep state adversaries in the intelligence services and the Department o

Half the customers didn’t know how to order on the iPad, a Google commenter wrote (Photo: Shake Shack) Fast-casual burger chain Shake Shack is axing its plans to go cashless after receiving complaints from customers wishing to pay with legal tender. The company will begin adding cashiers at its cashless kiosk restaurants, according to Market Insider, ending a short-lived experiment of only accepting cards some locations. The company rolled out its first cash-free kiosk loca

~ The latest scoop, information or news.

WHAT A NATION NEEDS MOST

Peter Schiff, Indirectly Solidifies the Ideals and Motivations Behind Global Y2C and the application

NO to CASH is NO to CIVIL LIBERTY

Gold will be explosive, unlike anything we’ve seen says Canada’s billionaire Frank Giustra

Peter Schiff: If You Understood What This Means, You'd Be Buying Gold As Fast As You Can

David Morgan - No Place Else to go But Gold & Silver